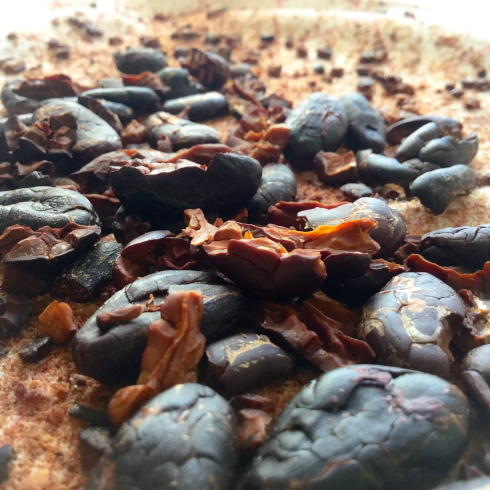 Well it’s been a while since I last wrote one of these, but I am bursting to share something. I did something this week which I had thought I would never do and now I am so pleased that I have! I purchased a new toy and some cocoa beans and set to work. I had to work a little creatively but I am amazed that my first attempt produced something that I am very pleased with. You’ll not find ‘Bean to Brownies’ on my website yet, but email me and I will make them for you!

At first, I had dismissed the whole idea of making chocolate from beans for brownies as a bit of a faff. But after speaking to a chocolatier friend of mine I was inspired to give it a go. I already knew the basics, you get some beans, roast them, shell them, nib them and finally grind them. So I bought a grinder (commonly known as a conche to those in the chocolate trade), some Grenadan cocoa beans, and some deodorised cocoa butter to help the process along. I armed myself with some other pretty rudimentary equipment, a chopping board, a wine bottle, and a hairdryer. Probably not what you were expecting me to list but I’m sure I can refine the process along the way.

It’s a simple process, more time consuming and messy than anything else. For my first test I weighed 500g of cocoa beans. I preheated my fan oven to 130 C. Laid the beans in a single layer on a baking tray and placed them in the centre of the oven and roasted for 20 minutes, giving the tray a little shake half way through. At this stage I won’t understand how the temperature and time will affect the flavour of the beans, I just needed to make sure that they were clean enough from roasting at this stage.

I left the beans to cool overnight and was delighted when the shells began to gently crackle as they cooled and split, this also helps to make the shells easier to remove.

The next day I set to work removing the shells by hand, only 500g to shell but it took me well over an hour. This is where the chopping board came in handy. I used to to gently crack not crush a number of beans at a time. A gentle crack means you can remove the shell in fewer larger pieces and retrieve a whole bean. I’m sure there are more time effective ways of doing this but I was enjoying the hands on element to the process and the novelty.

Once the beans and shells had been separated I took a large clean tea towel and laid it out on the work top. I placed a couple of hand fulls of shelled beans on the tea towel, folded the towel over and rolled the wine bottle over while applying as much pressure as I could. The beans broke relatively easily. I was aiming to reduce the size of the beans to nibs the size of fat grains of rice which, on the whole I managed. Beans were now nibs and ready to grind.

Now I have seen this done by others in the know many times before, but was also very aware for the same reason that the cocoa grinding equipment or conche can be quite a fragile bit of kit if not handled with respect. So a little nervously I set the grinder running with the stones set on the highest setting to allow for any bigger nibs passing under them and started to pour the nibs into the grinder and a little melted cocoa butter whilst blasting the outer metal drum, stones and nibs with the hair dryer. The heat helps the nibs to release cocoa butter and lubricate the process thereby reducing the strain on the stones as they grind. I think I was overly cautious but with good reason. I had to keep stopping to scrape down the sides as the nibs kept banking up due to being spun, so thought it would be advantageous at this stage to use the scraper that had been supplied, it made such a difference.

After about five hours I poured the cocoa liquor or mass into a container to let it cool and solidify, a bit like making a chocolate bar but without the need to temper as I am only going to use it for baking, simple!

I might return the mass to the conche/grinder and run for a little longer to reduce the particle size even further but probably only an extra hour or two. I didn’t mention previously but if you are conching and grinding cocoa for chocolate bars you will need to grind the chocolate until you have reduced the particle size of the cocoa to something that cannot be detected on the tongue. This can take upwards of eighteen hours on small scale equipment.

It was an exciting moment when i tipped the cooled lump of Grenadan cocoa mass from its container and hacked pieces off to melt into my brownies. I’m eating them as I type, the texture is unctious (is this spelt right) and the flavour is deep, slightly fruity, slightly earthy and very roasted. So there we have it, it must be a first, BEAN TO BROWNIES, I am very happy and feeling ever so slightly smug….